Here we log summarily the development of the project.

The first idea of the project was discussed in Bucharest on May 15 or 16 during the Craiova Colloquium on Leibniz organized by Adrian Niţă (see below a photo of that evening by Markku Roinila, might well be at that very moment). 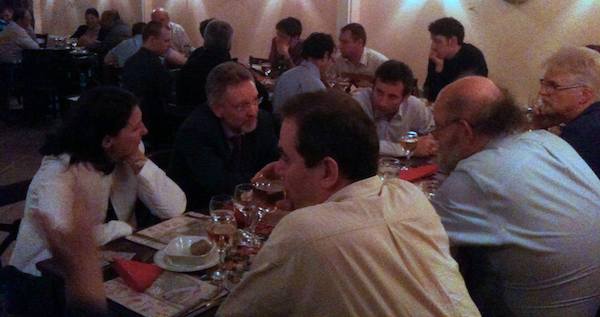 October 28 2013: At the annual meeting in Pisa, the project was presented to the Sodalitas Leibnitiana.

The Sodalitas Leibnitiana decides to engage in the project of an Online Dictionary of Leibniz’s Correspondents and Acquaintances, as an opportunity for collaboration betwen European societies of Leibnizian studies.

April 2014: a collaboration agreement with the Department of Philosophy and Education Sciences of the University of Turin is signed. The fMOD Research Group will support the Project and the University will provide, among other, the DOI identifiers for the Dictionary entries and items.

October 2014: the Leibniz-Archiv gives its patronage to the project.

November 10 2014: First Workshop on the LCA Project at the annual meeting of the Sodalitas Leibnitiana in Venice.

May 2015: appointment of the Scientific Board and of the Editorial Board.

July 2015: Start of the LeiCA Project (a support project of the fMOD Research Group for the starting phase of the LCA Project itself, financed by the University of Turin and the Fondazione Compagnia di San Paolo in Turin).

September 2015: the project is presented at a panel organised by Howard Hotson and Alain Ross on “Big data and the Republic of Letters: challenges and opportunities in digitizing early modern correspondence”, at the Conference of the German History Society at Queen Mary University of London.

July 2016: the first version of the working list of correspondents is ready.

July 22 2016: the LCA Project is presented at the X. Internationaler Leibniz-Kongress in Hanover.

The collaborating Societies initiate the process of inviting the authors of the prosopographic dictionary entries. In July (Hannover) and December (Padua): meetings between project coordinators and presidents of the Societies.

January 17 2017: Technical Workshop of the LCA Projet on “Prosopographic Networks and Conceptual Exchanges” in the framework of the DR2 Colloquium in Turin.

March 15-17 2017: in collaboration with the Herzog-August-Bibliothek, Workshop on “Subnetworks in Leibniz’s Correspondence and Intellectual Network” in Wolfenbüttel.

July-August 2017: Final phase of LeiCA project. Definition by Synapta of the architecture of the software platform for the LCA database (wikibase+triple store+Omeka), first development phase.

January 16 2018: seminar on the LCA Project in Hanover at the G.-W.-Leibniz-Bibliothek / Leibniz-Archiv.

June-November 2018 Installing and testing the system.

November 23 2018: the Gottfried-Wilhelm-Leibniz-Gesellschaft joins the project.

December 3 2018: First showcase for the software platform at the annual meeting of the Sodalitas Leibnitiana in Turin (presentation by Federico Silvestri).

December 2018–January 2019: LCA files are now embedded in Omeka pages; bibliographies are sourced through the Zotero API from the library of the lcaproject Zotero group. The production version of the software platform is ready.

February 2019: DOI identifiers added to LCA files series, by courtesy of the University of Turin, per the above-mentioned agreement.

Due mainly to health-related reasons, both individual and collective, the project was paused and — with the exception of a technical workshop for the Project staff in January — activity resumed in late 2020. 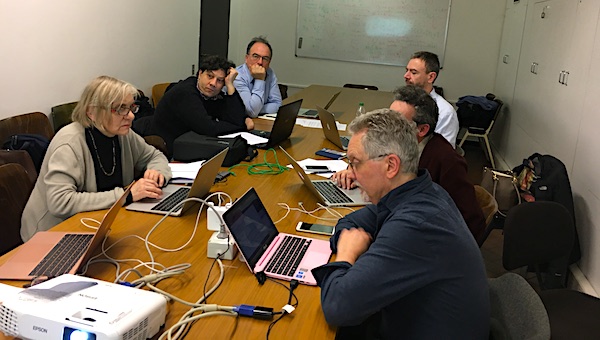 In 2021 the staff organized two training workshop for the LCA authors (June 25 for Italian authors, December 10 for French-speaking authors).